In Montana we mirror our commitment to science and outreach of the highest quality with an equally resolute commitment to include people from underrepresented groups in the STEM fields.

Recently we have conducted rigorous scientific research investigating the atmospheric responses to a total solar eclipse, specifically the propagation of internal atmospheric gravity waves. Always present in the atmosphere, these waves are caused by perturbations of the atmospheric medium and can be visualized by cloud patterns which are observable from space (Fig. 2) as well as the surface. Scientists have been trying to definitively detect eclipse-induced waves in the lower and middle atmosphere for decades. 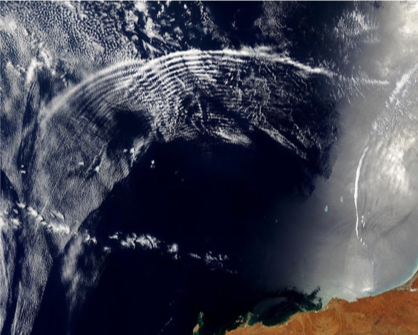 within the path of totality for 24 hours in western Chile provided extremely high-temporal resolution observations of the middle atmosphere before, during and after the eclipse (Fig. 3). 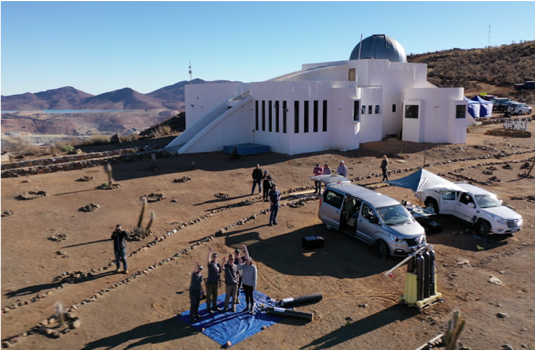 The 2019 campaign produced evidence that the eclipse was the source of stratospheric wave-like oscillations seen in the data following the eclipse. With support from MathWorks®, NSF, and NASA, MSGC researchers developed a Graphical User Interface (GUI) for characterizing the background atmosphere and detecting gravity waves. Scientific results have been presented at the AGU Fall 2019 meeting and a publication is currently in review.

Replication of 2019 results and expansion to multiple sites remains a critical next step in the scientific process. On December 14, 2020 a total solar eclipse will occur over Chile and Argentina (Fig. 4). Because the 2020 eclipse will travel west to east over the Andes Mountains, it represents the best opportunity for direct comparison to our 2019 results and for spatial comparison among sites.

The 2020 radiosonde campaign will build upon our work in 2017 and 2019 by performing measurements (25 radiosonde launches) from four sites across the path of totality between December 13th  – 15th . The four sites will be comprised of teams from Oklahoma, Kentucky, Idaho, and Montana.

Figure 4. Path of totality for the December 14, 2020 total solar eclipse. Image from https://eclipse.gsfc.nasa.gov/SEgoogle/SEgoogle2001/SE2020Dec14Tgoogle.html

Eclipses are uniquely predictable, large-scale disturbances in the atmosphere. Developing a better understanding of Earth’s dynamic atmospheric processes relies on taking advantage of rare phenomena like solar eclipses through direct observations in the field. One of the most immediate applications of this research is the improvement of global weather forecast and climate models. Improved climate models will aid scientists in developing climate change mitigation strategies and therefore contribute to an increase in the quality of life for millions of people around the world.

Through funding from the National Science Foundation, the 2020 field campaign core scientific objectives are to: